No matter how you cut it, no one likes to be rejected. Talent Acquisition professionals would probably admit that handling rejection isn’t their sweet spot and wasn’t a big part of their recruiting education. Unfortunately, few professionals who are working, even those working in recruiting, remember the pain of looking for a job. It’s always suppressed.

And in the past, who cared. No one to tell. Who would listen anyway? So what if we were ignored, or worse, told we were a top candidate, kept waiting through interminable hours of interviews, asked ridiculous questions and in the end realized we weren’t going to hear anything when we were promised. No polite ‘no’. Simply ghosted. No matter. We got up each time, dusted ourselves off and kept applying while silently telling ourselves that we would never treat others the way we were treated…

How bad is it, really? Well, worse than you can imagine. Read Diana Meisenhelter’s excellent article, Executive-Level Candidate Experience to feel the pain of it. I’m sure those who haven’t been out looking in a while might think it a fluke. It’s not. She inspired me to look for the data in TalentBoard’s 2019 Candidate Experience reports, the largest collaboration of employers to collect and share quality data about the hiring experience in our profession.

Last year, more than 195,000 candidates completed comprehensive surveys about their experience applying to 200+ employers in North America alone. And while the non-profit’s 2019 annual whitepaper on Candidate Experience is easily accessible and has been downloaded thousands of times in the last few months, it only scratches the surface of what we could study.

For example, we* asked each of the 195,000 respondents what kind of position they applied for. More than 3,000 indicated they had applied for a Director or VP position. We also wanted to learn whether they knew they had been rejected at the time they completed the survey. Among ALL respondents, 19,943 knew they had been rejected for a position and for high-level, leadership candidates that number was 916.

We also asked each respondent “HOW” they learned about the rejection:

TalentBoard is easily able to filter and compare who was and who wasn’t hired at the time they responded. The vast majority of respondents didn’t know the end result as they were somewhere in between (i.e. waiting to hear) and employers seldom wanted to go too far back to reach out to candidates about their experience. Thus, we can’t reliably say how bad it is for those who truly never learned their fate because many respondents were still in limbo and might have been holding out hope. (Still, we do know – and TalentBoard’s whitepaper clearly notes – that 47% of all candidates were still waiting to hear from the employer more than two months after their initial application.)

Experience of the rejected candidate

Our survey also included a series of questions about the candidate’s experience at each stage in their journey from application to onboarding as well as overall experience. For my purpose in writing this article, I examined all candidates that knew they were rejected, then filtered the high-level, leadership candidates that knew they were rejected and contrasted for each their cNPS Overall Score** which theoretically could range from -100 to +100.

The relationship between how candidates were rejected and their rating of their experience has not been statistically calculated but, they are certainly significantly correlated and though not ‘causal’ they are also not ‘coincidental’. (We would hope to eventually report other critical factors in addition to rejection that impact the friction in the hiring process.)

As Figure 1 shows, nearly 2/3 of ALL candidates who were rejected received the equivalent of an anonymous email. The likelihood is these are mostly, but not all, candidates that never got past the application phase. The 5% that received a phone call rejection are more likely (but not exclusively) finalists who weren’t selected. (‘Other’ includes text message rejections.) 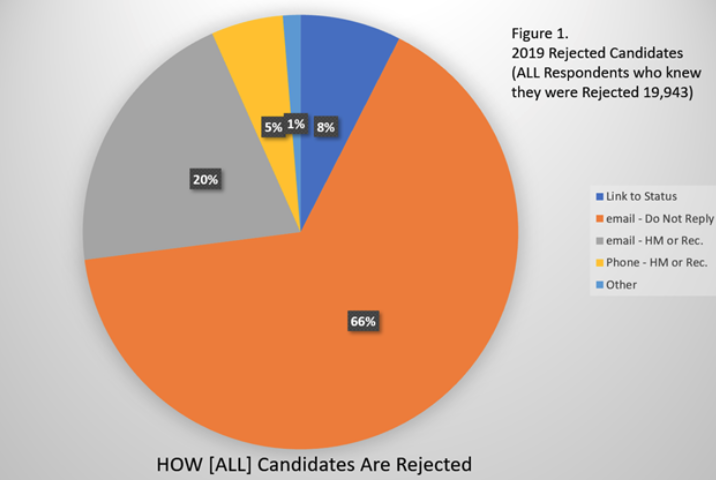 Figure 2 shows a similar distribution for candidate rejections of experienced leadership positions: Director and VP. However, it is worthwhile noting that nearly twice as many high-level respondents, proportionately, were rejected by phone. 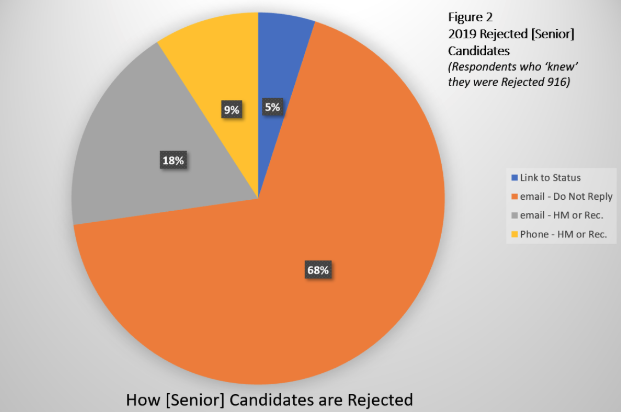 Figures 3 and 4 show Candidate Net Promoter Scores (Overall) for ALL candidates and for experienced leadership candidates respectively for each rejection approach. 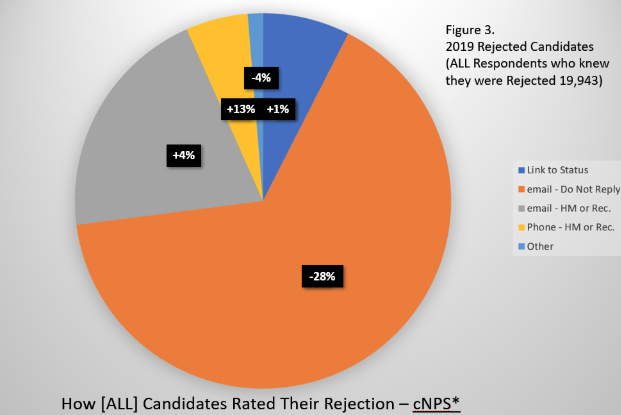 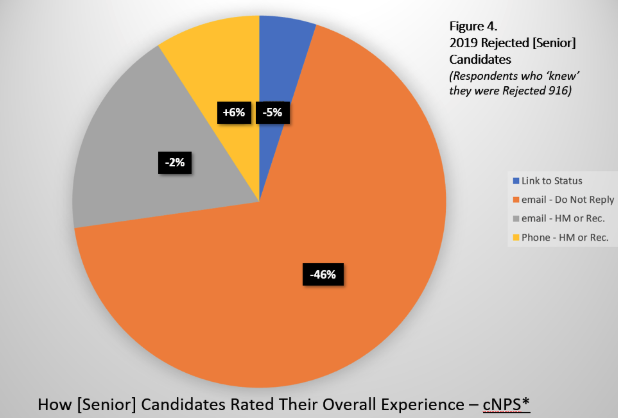 It is appropriate to note again that many factors impact the total experience of a candidate but this data suggests an experience capped by some styles of rejection that are clearly unacceptable in a majority of cases and likely impacting the attitudes and behaviors of rejected candidates. And these aren’t the candidates who were ghosted!

One reasonable conclusion is that increasingly candidates expect personalized communication. They know it is possible. They get it in their interactions with products and services and the more depersonalized the style the more their attitude and intention to act turns negative.

We know that 35% of all candidates with negative ratings will go public with their dissatisfaction and 53% report their intention to take their ‘relationship’ – including their business as a consumer – elsewhere. cNPS scores as low as -28 and -46 are extremely likely to show up in social media and influence the difficulty that employers will have when recruiting future talent.

Any employer not examining their rejection practices in the 21st century needs to have their heads examined.

1* Full disclosure: Gerry Crispin is a founder and board member of the TalentBoard, a non-profit dedicated to researching the treatment of candidate. He does not receive any financial return from his involvement.

2** cNPS: The Net Promoter Score for candidates was originally altered form the traditional approach to asking whether you would refer other to ‘apply’ on a 0-11 scale to a 1-4 scale with 1 and 4 each being ‘anchored’ by a specific phase as noted in the article.

Gerry co-authored eight books on the evolution of staffing and has written 100s of articles and whitepapers on similar topics during a career in Human Resources that spans more than 40 years from HR leadership positions at Johnson and Johnson; to boutique Executive Search firms; a Career Services Director at the University where he received his Engineering and 2 advanced degrees in Organizational/Industrial Behavior; and, GM of a major recruitment advertising firm even as he launched CareerXroads 25 years ago.

Talent Sourcing Is Not an Entry-Level Function

A new challenge for high-volume recruiting

A different focus on underrepresented talent

RN Retention program model that could easily be transitioned into other roles in an organization.