A glimpse into two key recruiting metrics: Time To Fill & Cost Per Hire 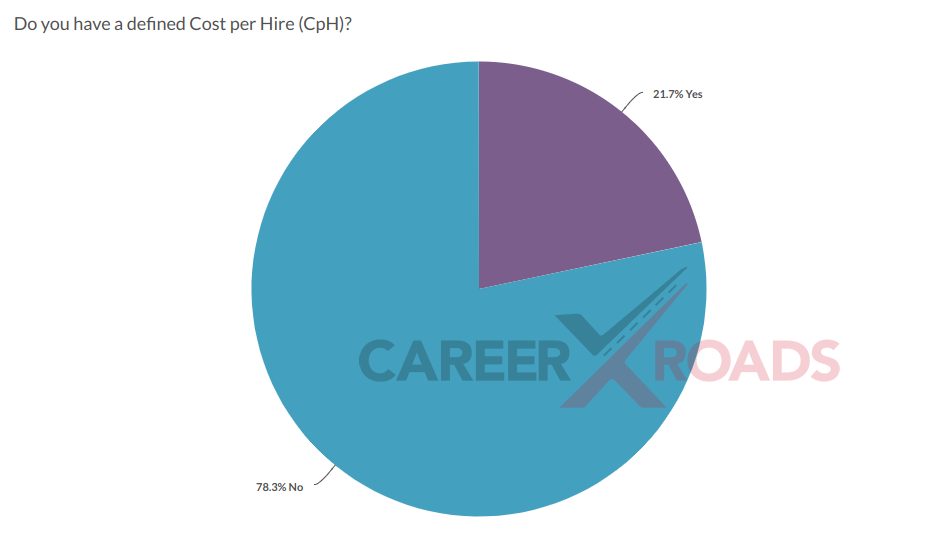 Talent acquisition leaders have a list of key benchmarks that they watch regularly and oftentimes are continually pushing their teams towards.  Of those metrics, two of the most common are Time to Fill (TtF) and Cost per Hire (CpH).  And believe it or not, even the most popular of industry benchmarks vary wildly from company to company for both of these.  So we asked our members to share some details around how they are calculating TtF and CpH within their own organizations.

Interestingly enough, only 22% of our responding companies reported having a standardized CpH formula.  And of those, the calculations were as complicated as including various elements such as uniforms, advertising, onboarding, and travel to simply dividing everything (and we mean, everything) by the number of hires made.  This, of course, means that the dollars reported could range anywhere from in the hundreds to the hundreds of thousands based on the positions and functions being accounted for.  And while some of these formulas and calculations might be considerably more labor-intensive and complicated than others, what’s important to note is that not one of them is incorrect.

We’ve got some data for that.

CXR members can check out the recent research performed with regards to TtF and CpH here.  But what should be noted by both members and non-members alike is that a cost measurement alone does not make or break the successful track of the recruiting function within a company.  Recruiting costs will differ wildly based on things like the various positions recruited for, the levels of the roles hired, the markets in which the companies work and hire, and numerous factors related to the job or economic markets.  In addition, cost alone does not typically get weighted against the TfF metric or the ever elusive Quality of Hire (QoH) measurement or even Recruiter, Hiring Manager, and Candidate satisfaction scores.

Time to Fill is no different when we look at how companies measure the span of days it typically takes to fill a role.  One company reports to beginning the clock the moment a job is abandoned or the department identifies a need and stops counting the day the new hire starts – regardless of whether or not the talent acquisition function has been notified yet.  Other organizations are breaking down their TtF calculations into subsets of Time to Find (usually when a candidate is presented to the manager), Time to Offer (when an offer is made), Time to Accept (when an offer is accepted by the candidate), and Time to Start (when the candidate begins their new job.)  Doing the latter does admittedly require quite a bit more attention to how candidates are moved through the process and creates some risk with regards to accurate tracking within Applicant Tracking Systems but could be argued as one of the better ways to identify where bottlenecks actually occur within the process.  (Yes, Hiring Manager who takes two weeks to conduct an interview… we’re absolutely talking about you!)

In short, there’s no golden ticket or magic calculation when trying to measure elements of the recruiting process.  But it is important to have trusted data from colleagues and peers that allows you to think objectively about what you may, or may not, want to track within your own organization.  The important thing to consider is how these elements get normalized within your company and how you’ll focus on increasing/decreasing any numbers by looking at your own results month over month and year over year.

At CXR, we’d argue that cost, speed, and quality are solid benchmarks to consider long before volume and requisition load should enter into the equation – that’s why we were excited when our members ask for this quick report that focused on cost and time.  There is, after all, a distinct difference between measuring recruiter productivity and tracking recruiter activity.  The former of which really matters with regards to moving a function forward and achieving higher levels of client/customer satisfaction while the latter will always be elusive, subjective, and suspect by those that don’t fully understand recruiting or sourcers.  (Yes, Hiring Manager… we’re still talking about you.)

Get the full details and all of the open comments left by CXR members on this TtF and CpH report here.  And if you’re a CXR member and interested in launching your own research, use the chatbot on the bottom right of the website to let us know.

A veteran of recruiting and HR, Hoyt is a sought-after speaker with presentations including national conferences with SHRM, LinkedIn, HR Technology and others in the USA as well as iRecruit, Australasian Talent Conference and more abroad. Chris has been promoting and leading full scale and enterprise-wide integrations of social media and mobile marketing within workforce strategies for his entire career. His expertise and passion for interactive/social recruiting, candidate experience, and both national and international recruiting strategies are all areas that Hoyt now leverages as co-owner and President at CareerXroads, a Recruiting/Staffing consulting and think tank organization that works with corporate leaders from around the world to break out of traditional recruitment practices and push the envelope in an effort to win the ongoing war for top talent.

If You Won’t Commit to Equal Pay Now…

How are you handling vaccine requirements?

Candidate Experience in a Specialized World

Our Measuring Inclusion Workshop covered a lot of information in just one hour! Lisa Russell, CEO & co-founder of Aleria led us through a discussion

Talent acquisition (TA), onboarding, and internal mobility have experienced intense turmoil in the past 18 months, and the next 18 months are likely to be...

PrevPreviousSomething Big in Talent Acquisition
NextBuilding your recruiting tech stack: one step at a timeNext

A glimpse into two key recruiting metrics: Time To Fill & Cost Per Hire